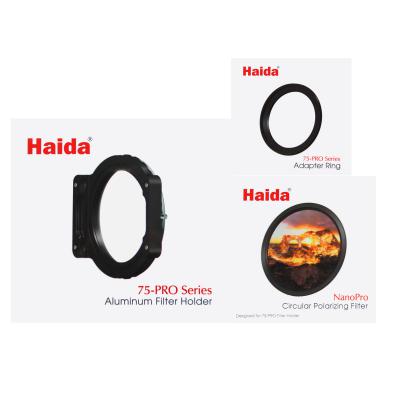 The NanoPro Multicoating is applied to both sides of the filter, making for an easy to clean, high quality Circular Polarizer that can help to reduce reflections and glare from non-metallic surfaces, such as the reflection of the Sun on water.

Made from high quality aluminum, the Haida 75-Pro Series Filter Holder is designed to hold up to three 2mm thick filters (75x75mm or 75x100mm) at a time, and the included 52mm Adapter Ring allows you to attach holder to any lens with a 52mm front thread diameter.