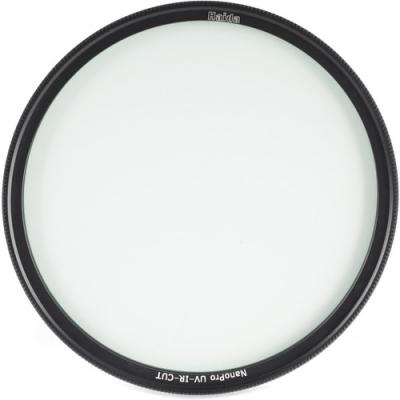 $42.00 InStock
HDN58UVIR
The Haida NanoPro MC UV/IR Cut Filter is an ultraviolet and infrared control filter that is useful for digital cinematography as well as still photography. While recording video with a CCD or CMOS camera, multi-stop neutral density filters are used to maintain proper exposure by compensating for increased light levels when widening the camera lens's iris to obtain a narrower depth of field. As the increased amount of light passes through multi-stop neutral density filtration, visible light is progressively blocked, while infrared light is allowed to pass through. As the proportion of infrared light that reaches the sensor of a camera being used for digital cinematography becomes greater, the results can show unwanted color shifts, particularly in dark areas of the frame such as shadows, where the appearance of black is dominant.

When the Haida NanoPro MC UV/IR Cut Filter is applied, ultraviolet light waves are blocked at 390 nanometers along with infrared light waves at 750 nanometers, helping to ensure that light falling on a digital camera sensor is limited to the visible spectrum. When used along with multi-stop neutral density filters while recording with a digital sensor, potential infrared color shifts are prevented or minimized, preserving color accuracy throughout the frame. This filter may also be used to help ensure that the appearance of unwanted blue casts is reduced while recording digital video or still photos under daylight that also features intense ultraviolet light.

The front and rear surfaces of a Haida NanoPro MC UV/IR Cut Filter each include eight layers of interference coatings, which allow it to limit the light that falls on a digital camera sensor to the visible spectrum. When combined with a wide-angle lens, lower-frequency wavelengths of visible light associated with yellow, orange, and red colors passing through the filter and along that lens type's curved edges can be impeded in a significantly greater degree than higher-frequency wavelengths of visible light associated with blue and violet colors. This can result in an unwanted green cast within an image taken with a Haida NanoPro MC UV/IR Cut Filter and a wide-angle lens. To avoid such color shifts using this filter, it is recommended not to be used with lenses that are intended to provide an angle of view greater than 60°.

The Haida NanoPro MC UV/IR Cut Filter is constructed from optical glass for clarity and color fidelity. To prevent internal ghosting and reflections, each glass surface includes 10 layers of anti-reflection coatings, which also offer greater protection to the filter substrate and help keep it clean for a longer period of time. The Nano coating associated with the Haida NanoPro MC UV/IR Cut Filter provides an additional layer that results in an improved beading effect when the surface comes in contact with water or oil, allowing for more efficient cleaning.