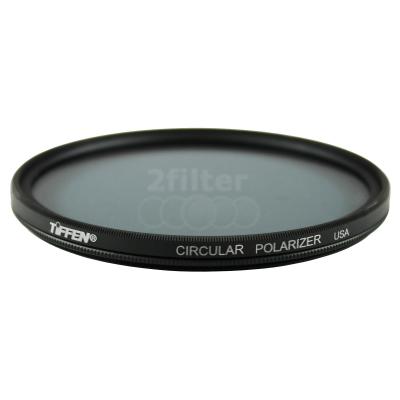 $24.99 InStock
49CP
Polarizers are most useful for increasing general outdoor color saturation and contrast. Polarizers can darken a blue sky, a key application, on color as well as on black-and-white film, but there are several factors to remember when doing this. To deepen a blue sky, it must be blue to start with, not white or hazy. Polarization is also angle-dependent. A blue sky will not be equally affected in all directions. The areas of deepest blue are determined by the following "rule of thumb." When setting up an exterior shot, make a right angle between thumb and forefinger. Point your forefinger at the sun. The area of deepest blue will be the band outlined by your thumb as it rotates around the pointing axis of your forefinger, directing the thumb from horizon to horizon. Generally, as you aim your camera either more into or away from the sun, the effect will gradually diminish. There is no effect directly at or away from the sun. Do not pan with a polarizer, without checking to see that the change in camera angle doesn't create undesirable noticeable changes in color or saturation. Also, with an extra-wide-angle view, the area of deepest blue may appear as a distinctly darker band in the sky. Both situations are best avoided. In all cases, the effect of the polarizer will be visible when viewing through it.

Polarizers need approximately 1-1/2 to 2 stops exposure compensation, usually without regard to rotational orientation or subject matter. They are also available in combination with certain standard conversion filters, such as the 85BPOL. In this case, add the polarizer's compensation to that of the second filter.

Certain camera optical systems employ internal surfaces that themselves polarize light. Using a standard (linear) polarizer will cause the light to be further absorbed by the internal optics, depending on the relative orientation. A Circular Polarizer is a linear one to which has been added,on the side facing the camera, a quarter wave "retarder." This "corkscrews" the plane of polarization, effectively depolarizing it, eliminating the problem. The Circular Polarizer otherwise functions in the same manner.

Combine the Tiffen Enhancing filter with a Polarizer filter for more dramatic effects.

Note! Circular polarizers are specifically designed for use with auto-focus SLR cameras (They will also work on manual systems without problems)